Why The Go-Betweens Continue To Inspire Us

Brisbane's finest have left their mark on a new generation of Australian artists.

What even is a Go-Between?

IT’S a middle-man or a middle-woman or indeed two men and two women or a combination thereof. He or she goes between to pass messages. The famous 1950’s novel The Go-Between was all about love, sadness and death but also and sexual awakening, by handwritten notes, passed through an intermediary.

These things are from where the band took their cues.

Then there’s the bridge. Melbourne has AC/DC Lane, Brisbane has Go Between Bridge. She runs over the Brisbane River in the inner-city, going between east and west, and she is tolled. Robert Forster once joked that it was nicer than a “Go-Betweens sewage works.” Apart from the cool name it’s just an everyday metropolitan bridge.

But it can be a trigger, even now. I was talking to a young musician from Queensland, Tia Gostelow. She’s from Mackay in Far North Queensland, close to Rockhampton where the late Grant McLennan was born. Robert and Grant formed the in 1978.

She’s only 17 and after being featured on Unearthed, triple j began championing her. Tia was born in the year 2000 as the Go-Betweens reformed for a final suite of songs. They had started up in tandem with punk, but like in New York, just slightly outside of it looking in.

They made nine albums and most of the whole nine was fantastic, unimpeachable, wildly influential stuff; sad and bemused and very smart music, fragile, strange, always beautiful in some way or other. Highly mysterious. It did seem like they were messengers from some place that you couldn’t quite know.

When I spoke to her Tia had been into the for only two weeks. She was driven over the bridge on a trip down from the cattle and cane fields up north. A few things clicked in her mind. She’d seen the GW McLennan stage at Splendour, her parents knew about the band, she’d heard the name bandied around and also heard about the Grant McLennan Fellowship for Queensland musicians. Then the penny dropped with the bridge.

What even is a Go-Between?

First she went into ‘Go-Betweens Essentials’ on Apple Music, heard ‘’ and ‘’ and some other songs, then did some reading. She became interested in their unique story and particularly Grant’s story.

He came from up her way; he was the heartbeat of the group and a wonderful poet. He died suddenly in 2006, aged 48.

I think they're better than The Smiths and with much more longevity.

I spoke to a couple more musicians: Melbourne’s Gus Lord from Twerps, , , The Stevens and ; and Joe Agius from , of Brisbane. Gus is 27 and Joe is 25. The Go-Betweens continue to be wildly influential to young Australian musicians, perhaps a certain demographic of them, but when it hits it hits hard.

The Twerps and The Creases for sure. Joe from The Creases says many of his musician friends in other Brisbane bands are more full-on about it than he is. Romy Vager from RVG is an avowed fan. “I don’t think it was an instant love,” she says, “ but they have that ability to sneak up on you; get inside you.”

Dick Diver without doubt, and a bunch of other bands of Melbourne’s Chapter Music label. , also of Melbourne, now signed to Sub Pop, who say they are into “golden age Australian guitar music”.

Alex Gow of Melbourne band Oh Mercy, a paid-up and Go-Betweens enthusiast, says: “The music they produced has a mountain of personality. It’s evocative and romantic. It’s not elitist at all. It’s friendly and it makes you feel something. It’s irresistible. It stands the test of time. How could you not love them? As a songwriter, there’s so much to sink your teeth into.”

Gus and Joe both in fact had epiphanies around the song ‘’, from the great 1986 album 16 Lovers Lane.

Gus heard it live in Perth when he was 18: “So eloquent and simple,” he says. “They seemed to be able to articulate something with depth.” The Creases supported Franz Ferdinand in Brisbane in 2013, and Franz Ferdinand played a cover of the same song that night.

“Brisbane loves the Go-Betweens,” he says. “The places you visit, places you live around, people you know, it’s very personal for us.”

Who Loves The Sun?

IT seems like right now the Go-Betweens or at least lovestruck memories of them – for they are gone – are everywhere again. The documentary Right Here was shown for the first time at the Melbourne International Film Festival and it is incredible – a film, says director and friend of the band Kriv Stenders, about “choosing to live the creative life and the sacrifices and the cost that come with that. Trauma, joy, pain, triumph”.

There’s also Robert’s book Grant and I, a memoir but also a tribute to his best friend. Remember that when Robert decided he wanted a new band (he had played three shows in two years with The Godots) he flipped the usual script. So instead of asking people who could play, he asked Grant, who could not.

This was because of the . If ever there were two kindred bands – the masters and the students who ended up the new masters – it is the Velvets and the Gobees.

Robert wrote about this in a catalogue essay for an Andy Warhol exhibition in Brisbane, in 2007. He called it ‘‘ and he opens with a wonderful declaration summing up the brittle power of an entire canon of indie rock — “they (the Velvets) were the first band I ever heard who wrote songs better than they could play them”.

I’ve always loved guitar music that sounds like it’s about to fall apart, where the beginnings and endings are indistinct and unimportant. I grew up in New Zealand on Flying Nun in the ‘80s; in fact the first time I saw the Go-Betweens was in Auckland in 1985 or 1986 with, I think, . Robert was wearing a dress and it sounded and looked like all the music I’d ever wanted to hear.

I phoned Robert to get a little more on his Velvet Underground thesis. He lives in The Gap to the west of central Brisbane in the hills and the trees, as he always has.

“Lou sounded like he had been playing guitar for about a year when I first heard The Velvet Underground and Nico. This would have been in about 1975 when I was 18. It sounded a lot rawer and wilder than, say, The Kinks. It sounded like everyone had just started playing. But they had great songs. Which is the idea I took into the Go-Betweens.

“I knew I could start a band with Grant, who couldn’t play. It didn’t matter. I had a breakthrough in my thinking with the Velvets. I could hear that ‘Heroin’ was only two chords. There wasn’t that masking that other bands did. It was minimalism.”

Alex Gow says it didn’t matter they weren’t technical because they had such good ideas. “They performed those ideas the only way they could: with heart, ambition and confidence.”

Things changed of course; the music changed. The opening track on third album Spring Hill Fair, ‘’, is lush and complete and has a fullness to it. It was written by Grant. His line, “Hands like hooks, you’ll get hurt if you play with crooks”, seems to signal the dark context in their sweetest song, and their closest to a hit, : “Watch the butcher shine his knives, and this town is full of battered wives.”

Lyrically, I would say, the Go-Betweens are hard to beat. By anyone.

"The music they produced has a mountain of personality."

The five-piece lineup and increasingly polished sound of the 16 Lovers Lane era is a favourite for many fans, but the costs were mounting. The relationships in the band were in strife and Robert and Grant were exerting more control over the songwriting; they later settled out of court with their former lovers, drummer Lindy Morrison and violin player Amanda Brown, for royalties.

“Both of us refused to be defined as the girlfriends,” Lindy says in the new documentary. The band was broken up by the men in 1989, but would reform, then Grant died. But it just seems to me as if they can be everlasting, despite all the troubles and purely on the strength of the music. 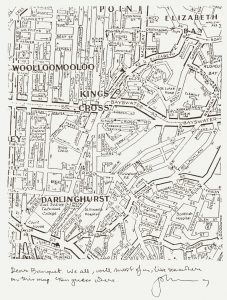 The film makes the point that they would have been pushed harder by one of their early labels, Rough Trade, if it wasn’t for an emerging band called . I think they’re better than The Smiths and with much more longevity.

It was amazing but not surprising to find out from Tia Gostelow that she’s only just heard of them and is only just beginning to discern what Grant, paraphrasing his hero , called his wonderful band’s “striped sunlight sound”.