At Home With The Prolific (Sandy) Alex G

We visit the North Philly apartment of this unique bedroom artist.

ALEXANDER Giannascoli – the singer and songwriter better known as (Sandy) Alex G – is at home, but the place doesn’t feel like home. His roommates moved into this modest North Philly apartment a few months ago, while he was on tour. He’s only been here a about a week.

Most of his belongings are in storage. All but one of his guitars are at a practice space across town. His bedroom is spare: some books, a painting by a friend of his, a pile of clothes, a mattress on the floor.

No use getting comfortable; two days after this interview he’ll be back on tour, this time for a month of shows across Europe: the UK, France, Spain, Belgium maybe? He can’t quite recall. All he knows is he’s headlining. “Hopefully we’ll break even this time,” he says, half joking. “Usually we just lose a shitload of money.”

The 24-year-old musician quickly rose to prominence in the past few years thanks to fans (Frank Ocean, among them) discovering his music on Bandcamp. Alex’s sound is intimate and rustic, the songs often built around gently layered guitars and vocals. His sometimes-breathy vocal approach has garnered comparisons to one of his heroes, Elliott Smith. 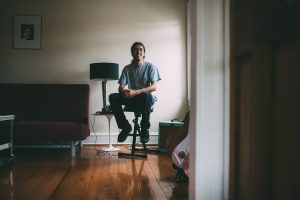 Alex originally went by Alex G, and later added the parenthetical nickname (Sandy) for reasons he’s never stated publicly. (Most likely it’s because there is another Alex G out there, a singer-songwriter and YouTube star from Colorado.)

Rocket — released in May by Domino Records, home to Franz Ferdinand, Dirty Projectors, Arctic Monkeys, etc. — was his first under the new name, and it hasn’t seemed to slow him down. The album scored an 8.4 from Pitchfork for its “obtuse storytelling and oddly-shaped songs” and has led to a seemingly endless touring schedule.

He and his band recently wrapped up a trek across the United States opening for veteran rockers Built to Spill. Colour him impressed. “Doug [Martsch] was like tour-managing the band himself,” Alex marvels. “They’re just, like, badass adults. They’re so cool.”

“I Don’t Know What The Fuck I’m Doing”

HE’S sitting on a couch in the living room while coffee brews in the kitchen. A cat named Nesbitt with a grumpy, smooshed-in face wanders around at his feet. The sound of a violin comes wafting in from two rooms away. That’s his girlfriend, Molly Germer, a classically trained violinist and the only other musician to appear on Rocket. He played everything else: guitar, drums, bass, you name it, and recorded it all on his laptop.

He’s addicted to GarageBand. The software is intrinsic to the (Sandy) Alex G sound and writing process. He starts with guitar or keyboards, just layering and fine-tuning, each track represented by a horizontal window on his computer screen.

The lyrics and recorded vocals come last, usually, with Alex propping up the microphone in the seam of an open book. (Today it’s Stephen King’s It, which he’s almost finished. Before that, he plowed through Gunter Grass’ equally immense The Tin Drum, which he borrowed from Frances Quinlan of fellow Philly band Hop Along.)

Alex is comically low-tech and low maintenance. Where most homespun artists often ditch the bedroom for the recording studio, he just doesn’t see it happening.

“Every single song is a product of sculpting, not just recording perfect tracks every time,” he says, gesturing at the sound waves on the screen. “I’m not really a crazy perfectionist. As soon as it captures vaguely what I’m trying to say, I’m like ‘alright, it’s good.’”

He laughs at the idea of trying to explain himself to a producer. “A lot of times I’ll have an idea for what I want it to sound like and it’s so hard to put that into words. I don’t know any of the terminology. I didn’t do recording school. I don’t know what the fuck I’m doing,” he shrugs. “If I was paying someone, they’d be clicking every single button, hoping. It’s so much trial and error.”

When an album is nearly done, Alex brings the stems (raw music files) to New York sound engineer Jacob Portrait to mix it and “make it sound pro,” as Alex puts it.

When it’s time to play live, he burns the music onto CDs for his bandmates. “We almost learn it the way you learn a cover,” he says. “Most of the songs can’t be translated exactly” — too many random instrumentation and idiosyncrasies in the recording, from all that tinkering. 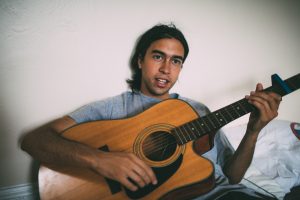 There’s something else about the music that changes once it leaves his bedroom, though Alex struggles to put it into words. “A lot of the recordings have a tongue-in cheek quality, I think.” Sometimes he throws in a little country, a bit of faux-jazz, playful touches that add texture and intimacy.

Those aspects are sacrificed when the music reaches the stage. “You can’t really be subtle when you’re playing live. You just have to own everything. It was tricky trusting that stuff, at first. The songs make sense to me as recordings. You listen to it and it’s a little jokey weird thing. Then to play it live you have to fully commit.”

GROWING up in Havertown, a quiet suburb just outside of Philadelphia, Alex always had dreams of making music. “My friends and I would do like punk shows and shit since we were young teenagers, and the feeling of admiration you get when you play a show — everyone respects you and moshes and shit, and you feel the coolest you will ever feel.” He says, smiling. School couldn’t hold a candle to that. “Nothing makes you feel as cool as playing a show.”

When things started taking off a few years ago, Alex dropped out of Temple University (where he was an English major), for a life of touring and recording. His parents are coming around to the idea, but his big sister Rachel was always on board. She’s the one who turned him onto Modest Mouse and other good stuff when he was little.

“She still dictates my taste in music. Every band that I like is pretty much a hand-me- down from her,” he says. “She was like the first person that kind of egged me on.”

He used to record music on the family computer — rock, punk, “shitty midi techno stuff” and burn her a copy to see what she thought.

“She’d be like ‘This is amazing, you’re a genius.’ And then I’d be like ‘Ooh, I am a genius.’ So it’s kind of thanks to her that I’m like doing this. I’d had enough — what’s it called when the mouse gets the cheese, after the experiments? A reward?”

“Hopefully we’ll break even this time. Usually we just lose a shitload of money.”

PEOPLE of a certain age have been known to sigh with relief that there was no Facebook when they were younger, and thus the most embarrassing phases and phrases from their youth were allowed to fade from memory. Alex deleted his Facebook account for this very reason, but he faces a similar situation peculiar to his art.

He’s been recording music since he was 13, and a lot of it is online either because his fans, or a younger version of himself, uploaded them to one site or another. Not all of it is up to his current standards – too earnest, too whiny – of course, and since much of it has made its way to YouTube, it’s never going away.

“It’s so embarrassing to hear some of it. I get why someone would like it, but just for me to hear – I was just so immature, you know?” It haunts him, he says, but he’s made peace with it. “If people like it then fuck it.”

Alex cares what people think of him. He noticed when some fans criticised Rocket’s expanded horizons. “I’ve looked shit up on YouTube and people are like, ‘This is boring, we want the old sound’,” he says. The poor guy actually reads YouTube comments. “I think a lot of people wanted me to keep doing Elliott Smith rip-off rock.”

As for record reviews, he steers clear. “I checked out the Pitchfork one, but I think I’m just trying to not read any of them because even when they’re good, they’re not – it’s the reviewer’s job to interpret it, and I’m not even sure how I would interpret stuff myself. So then I read someone else’s interpretation, and I’m like, ‘no’. It frustrates me.”

Alex recently headlined in one of Philadelphia’s larger venues, Union Transfer. There was an outpouring of support for the local-kid-turned-rock-star.

Most reactions were positive, but he can’t help but notice a few negative tweets here and there. “People give us shit because we always play way too long or something,” he shrugs. “They actually have a point. I know even if it’s my favorite band, I get tired of it after awhile. It’s just that when you’re playing it’s so … It feels so fuckin’ fun, and I don’t want to stop.”

There’s plenty of positive feedback out there, of course. Frank Ocean is famously a fan of Alex’s work. The Odd Future alumnus and R&B/soul/kitchen-sink singer-songwriter summoned him to the studio several times to lay down some guitar tracks on the 2016 releases Blonde and Endless.

Alex went along – too young and “out of the loop” to realise what a big deal it was. “I just thought it would be cool. And then afterward, people were like, ‘You did that?’” He laughs. “I think if I was a big fan I would have been choked up a little at the time.”

Since then, the two have played live together a couple times, at large music festivals, and Alex’s gotten into Ocean’s music. “Yeah, I think it’s cool as shit. It would be fucked up if I didn’t.”