A day in the life of the alt-pop rising star.

BILLIE Eilish breezes into a chic cafe in downtown Los Angeles at dusk on a warm Sunday evening in August.

There are a number of reasons to be intimidated by her. The spiked metal choker she wears around her neck. The baggy black silk pajama set she’s rocking as daywear.

Her striking high-fashion face and the aura of palpable cool the LA-based singer-songwriter emanates through her music, her social media and her in-person presence as she takes a seat across the table.

But for as many ways as Billie might make one nervous, there are more ways she puts you at ease. There’s the fact that she arrived here with her mum, who travels everywhere with her 15-year-old daughter – yes, 15. There’s Billie’s self-deprecating sense of humor. Her easy, robust laugh. Her frequent use of the word “dude” and the way her big, icy blue eyes widen with excitement as she recaps the current swirl of her work schedule.

BILLIE is, as they say, having a moment.

Her hometown show in LA a week before our interview sold out well in advance, as did a small run of promo shows last month in Sydney, Melbourne and New Zealand, not to mention every stop on her upcoming US tour. A few kilometres from here, she hovers above West Hollywood on a billboard.

It’s for her recently released debut EP, Don’t Smile At Me, a clever eight-song alt-pop effort that includes her dreamy viral smash ‘Ocean Eyes’. Billie has received major media attention from music sites and fashion mags, with many reporters inquiring about how it feels to be 15 years old and on an upward trajectory towards musical fame. She honestly has no idea.

“People ask what it’s like to be me,” she says. “Dude, nobody prepared me to feel anything.”

But if Billie seems young even for the youth-obsessed pop world, everything that’s currently happening for her also feels like an inevitable conclusion.

"She Sang Non-Stop, All The Time"

BORN with a mouthful of a name (Billie Eilish Pirate Baird O’Connell) she was raised in the Highland Park neighbourhood of Los Angeles by actor parents who were both deeply into music.

She and her older brother Finneas O’Connell – a musician and actor who has appeared on shows including Glee and Modern Family – were home-schooled, creating a deep brother-sister bond and giving them the time and space to explore their artistic interests.

Dad schooled them with mix-CDs featuring everyone from The Beatles to Peggy Lee and Linkin Park. Mum taught them to write music. Billie had a horse-riding phase before becoming a devoted dance student – she only stopped recently due to an injury – but through it all, she was singing. In a home movie made when Billie was two, she stands in the bathtub doing a rendition of ‘Twinkle, Twinkle Little Star’ with perfect pitch.

“It was like, ‘Whoa, what’s going on there,’” says Billie’s mum Maggie Baird. “She sang non-stop, all the time.”

A natural ham who was always into photography, theatre and home-school-community talent shows, Billie started writing her own songs at age 11 “because I had all of this stuff in my head and I wanted to get it out.”

Her first collaborator was her brother, who was also becoming increasingly invested in music. It was Finneas, now 20, who wrote and produced last year’s ‘Ocean Eyes’, a sparsely smoldering ode to deep infatuation. He felt his voice wasn’t doing the song justice, so he went to his sister’s bedroom and, as he recalls, “begged her” to record it.

Billie laid down the vocals and the pair uploaded the track to Soundcloud late on a Wednesday simply so they’d have a link to email their dance teacher, who planned to use the song as part of a class recital. It started racking up streams that night and was soon picked up by music discovery platform Hillydilly.

“When it got 1000 plays,” Finneas recalls, “Billie and I were both like, ‘Okay, let’s go to Taco Bell and celebrate.”

The numbers continued rising long after the tacos were eaten, with ‘Ocean Eyes’ ultimately garnering 2.2 million Soundcloud streams, 17 million Spotify plays and earning Billie massive interest from managers and labels. After a year’s worth of meetings, the family settled with Interscope subsidiary Darkroom.

They believed the label would invest in Billie as a long-term project and give her the freedom to execute the hyper-specific vision that manifests in her music, videos, fashion sense and alternately “goofy millennial” and “haute couture ingénue” public image.

“Billie has a very clear vision and when she expresses it,” her mother says, “people move.”

WITH the launch of the EP, the tour and several music videos, Billie’s vision has lately been coming to life. In the new video for ‘Watch’, Billie is tied to a ladder before her alter-ego lights her on fire in front of four orange Dodge Chargers, which of course match her outfit.

The clip for ‘Bellyache’ finds her pulling a wagon of cash through the Mojave Desert while dancing around in a yellow plastic fireman’s overalls until she’s stopped by the police for the crimes confessed to in the lyrics. (“My friends aren’t far/In the back of my car/Lay their bodies.”)

For as personal as some of her lyrical content might be, Billie is quick to point out that her writing is often as much an exercise in fiction as it is actual confession.

“If you write a song about something you’re feeling that people might think is wrong, no one’s going to know you actually feel that way.”

In this way Billie gets to embrace her inner actress. Lyrics become plotlines as she puts on other personalities to deliver them, singing often gleefully macabre lyrics about breakups, rivalries and romance as a hostage situation.

She’s written from the point of view of friends and from someone she hurt (“When I hear it I’m like, ‘sorry’”), demonstrating a more mature level of empathy than one might expect from someone who can’t even drive yet. (“Billie is an old soul for sure,” says one of her dance teachers Julie Schmid.)

On ‘Party Favor’ she breaks up with a fictional partner on their birthday, via voicemail. Her voice is glowing and crystalline, with a grit and swagger that defies its delicacy.

DON’T Smile At Me was a collaboration between Billie and Finneas, who recorded it at their parents’ house, where they both live. Finneas produced the EP, and the pair worked so closely on music and lyrics that they now forget which one of them made certain parts.

“My sister’s voice just blows my mind,” he says on the phone. “She’s an incredible writer and has a really definitive take on the world and her own emotions.”

“Of course we argue and get in fights,” Billie says of working with her big brother, “but it’s just easy. He’s my best friend, basically. ”

Billie’s tours now fill in for the road trips they used to take as family vacations. The brother-sister duo is thrilled not only to be on tour (“at this point folding T-shirts at the merch stand is exciting to us,” Finneas says), but to be doing it alongside the people who are also inherently their biggest supporters and strongest safety net.

Finneas performs with his sister during shows, manning beats and guitar while Billie commands the stage with a charisma more closely connected to Kanye and Kendrick than Lorde, another young female pop star she’s often compared to.

“She’s a force onstage,” Finneas says of his sister. “I’ve never been more intimidated by a 15-year-old. She puts across this menacing vibe.”

HIP-HOP has been a primary influence on Billie since she discovered the genre through Childish Gambino’s 2013 LP Because the Internet. (She was 12 at the time.) She says Tyler, the Creator “changed the way she thinks” citing the Odd Future leader’s sonic output and fashion sense as templates for her own path.

Developing a fashion line is part of her long-term vision, and she’s already established a singular style characterised by bright colors, baggy pants, oversized jackets, re-worked thrift-store finds and baby-blue hair, which she spent hours in the salon chair yesterday getting dyed.

She used the time to scroll through Instagram and comment on and like every photo her fans posted of her. It took three hours. (There are currently 24,867 photos tagged #billieeilish.)

Maintaining this one-to-one connection is important to Billie, although she knows the task will get harder as she gets more popular, which given the buzz around her first release, she almost certainly will.

Jaden Smith included ‘Ocean Eyes’ on a public playlist, while Charlie XCX recently tweeted “i really feeeeeel @billieeilish btw.” The day Don’t Smile At Me was released, Billie and her brother were at home writing new music. They have more than a half-dozen new songs ready to go.

SITTING here with Billie it’s easy to forget that you’re ostensibly speaking with a child, albeit one with a sophisticated world view and much cooler wardrobe than your own. Until a few weeks ago Billie was traveling with the Los Angeles Children’s Choir, which she has performed in for seven years but had to give up due to the demands of her own career.

Certain social situations have become awkward now that she’s in the public eye, with both her best friends and people she doesn’t know acting slightly strange as they adjust to her success. 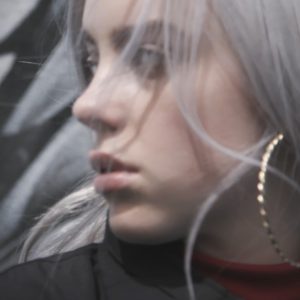 All of her new fake friends are “exhausting”, but it’s all part of the job she has created for herself while most of her peers are still studying for mid-terms and hanging out at the mall.

“This is pretty much my education and my homework,” she says. “It’s a different kind of work than other 15 year olds do, but it’s still a lot of work dude, and I love it, and it’s all worth it.”

Tonight Billie has got to go home and get prepped for a video shoot in the morning, then the trip to New York, then the other video shoot, and so on. She offers a wide smile and a hug on her way out the door, looking simultaneously like a professional pop star and an excited kid navigating a dream come true.